The imminent release of the latest version of Flash Professional on 8 February 2016 is going to be something quite special.

In light of constantly changing web technologies Adobe has announced that Flash Professional will be renamed to Adobe Animate CC in the next update, and will bring with it new features and first class support to help users create animations for any platform.
This move has been a long time coming with Adobe ditching Flash for mobile in 2011, however Adobe says that it’s “committed to working with industry partners to help ensure the ongoing compatibility and security of Flash content,” and has revealed that it is working with certain stakeholders to make this happen. 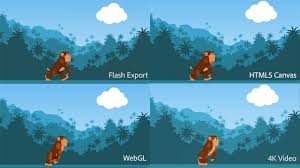 The exciting part of this release beyond its new compatibility with HTML5, Web GL, Flash and 4K video, is the release of significant new features for professional animators. Users will now reap the benefits of the increased capabilities through access to Creative Cloud Libraries and Adobe Stock. Users will be able to sync with mobile apps such as Adobe Capture, and integrate assets into their designs. Adobe Animate CC will also introduce the ability to use vector art brushes allowing for animation of the stroke after it has been drawn.
Adobe says that these are just some of the changes that will be a part of the new Adobe Animate CC but we will have to wait a few more days before we get to experience its full capabilities.