The Dax Data team is excited to announce the release of Photoshop Elements 14 & Premiere Elements 14, now available in South Africa. Elements 14 software uses content intelligence, automated features and a friendly interface to help users effortlessly turn your quick snapshots and video clips into amazing photos and movies.
Adobe revamped the Elements Organiser to make it easier to find the photos and videos users want to edit. The People view should recognise faces better and stacks photos by person during import, simplifying the process of tracking them down later. Adobe also enhanced the Places view, so users can assign locations to their photos and videos and view them on a map, as well as the Events View, which now clusters media by date range.

Bye-bye, camera shake: “A selfies’ best friend,” but it’s great for any photo shot with a handheld camera. Just click to remove the camera shake blurs that come from unsteady hands.
Never a hazy day: Ever notice that, when taking a photo of an outdoor landscape, moisture in the air can cause the background to look hazy? Haze Remover makes the background as crisp as what’s up front. De-haze in one click, or use sliders for more control.
Speed Guided Edit for action shots: Whether a photo captures a ball in flight, a bike zipping by or some other cool moment, users can get step-by-step help amping up the action by adding cool motion blurs.
Re-size in seconds with a new Guided Edit: Want photos to fit a certain picture frame or spot on a website? With step-by-step help, re-sizing has never been easier.
Select hair in a snap: It used to be a real chore to select hair, pet fur and other fine details in photos. Now users can just paint loosely over the area you want to select, and Elements detects the edges and does the rest with the Fine Detail Selection option.
Get custom looks to fit any photo: Want to give a photo some extra style, but not sure which effect will look best? Elements analyzes the subject, color and lighting and Smart Looks gives users five effects that fit perfectly.
Quick edits made easier: Quick Edit mode is now even friendlier and easier to use, allowing users to rotate photos and make quick fixes faster than before.

Tell dazzling stories with motion titles: Grab attention with new, professional-looking motion titles. Premiere Elements makes it easy to animate text and graphics using built-in presets.
Color Pop Guided Edit for instant wow: Color Pop for photos was a big hit last year, so Adobe added a Guided Edit for Premiere Elements this year. Create some visual drama by popping one or more colors in a scene and pushing everything else to black-and-white. Users can fine-tune for hue, saturation and luminance, too. Elements walks you through it step by step.
Play with time using Guided Edits: Get step-by-step help creating slow-motion effects that add emphasis, suspense or drama. Or, get guidance with adding fast-motion effects that speed up stories and create energy, excitement or fun.
Go beyond HD with 4K: Now users can use Premiere Elements to edit and view 4K movies for the ultimate cinematic experience.*
Sound your best: Audio sets a movie’s mood, and now it’s easier than ever to fine-tune the sound. The new audio features together in one place making them easy to find and a new toggle screen lets users focus on just audio or video parts of a clip as needed.
Easily export optimised movies in multiple formats: Now when ready to export a movie, Premiere Elements recommends settings. That way users get a movie that looks great on whatever device or screen they choose, from iPads, iPods and other smartphones to big-screen 4K and HD TVs. 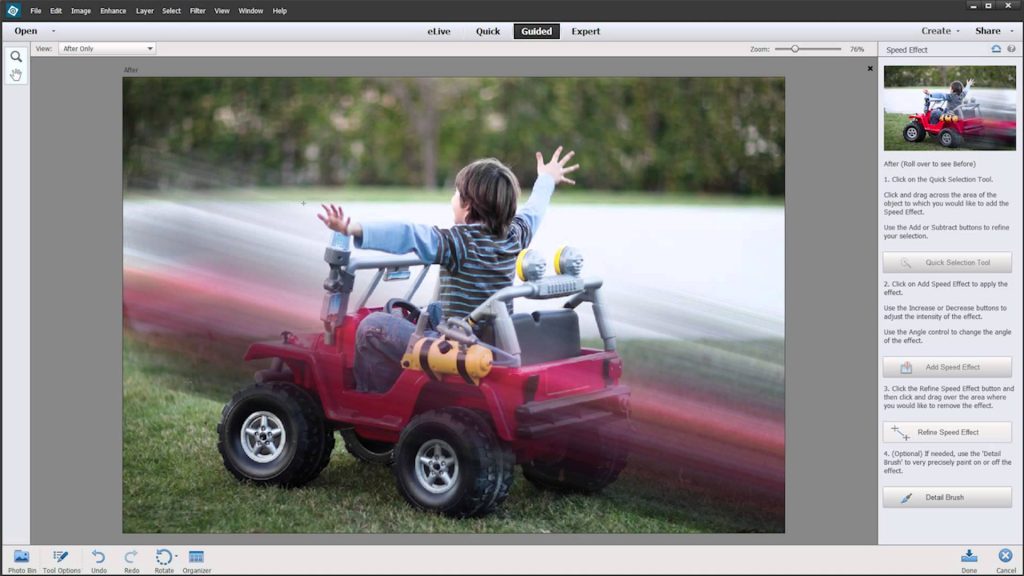